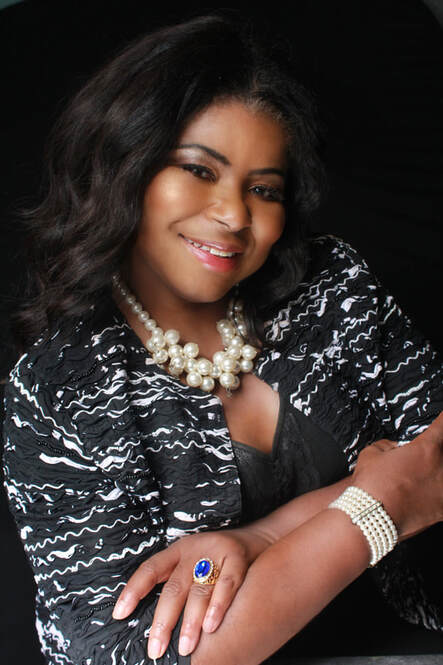 Dr. Cynthia Oriyomi Ashley is the Chair of Restoring Our Community Media & Arts Network Foundation and the Founder and CEO/President of Total Faith Network Television (TFNTV) Media Enterprises, Inc. An independent broadcast, cablecast & webcast television network and strategic media marketing corporation that uses mass communications, social media and digital technology. TFNTV produces content (programming) that inspires, educates, challenges, heals and empowers viewers to win. TFNTV promotes individuals, communities, cultures, and societies-at-large positively Dr. Cyndi states, "I believe in the power of the personal story. I know each person is uniquely created in the Imago Dei (image of God). The internet has made us all global citizens - we're all interconnected one with another. I also know that visual storytelling and media has a direct impact upon the growth and development of self-esteem, self-respect and self-identity! Whoever controls the narrative controls history and future events! " Dr. Cyndi is determined to influence men, women, elders, youth and children globally (especially females of the African Diaspora) utilizing mass communications, which includes all forms of media to help promote well-being, wellness and wholeness.

As a Minority owned & operated independent broadcast, cablecast & webcast television network, TFNTV continues to organically expand throughout the USA and around the globe producing content that "educates, heals & transforms minds," and ultimately helping people to WIN in life. TFNTV is registered in New York State Lower Valley Hudson Region of Westchester County as a Minority Business Enterprise and Minority Women Business Enterprise (W/MBE). Based in the City of Yonkers, New York the third largest city in New York State and the largest city in Westchester County, TFNTV has virtual offices in California, Texas, Georgia & Delaware. TFNTV is an innovative media consortium that thrives on creating, building and strengthening relationships using mass communications and media marketing. TFNTV reaches tens of millions of cable subscriber households regionally that include Comcast, Altise, Spectrum, Time Warner, RCN, FiOs, Charter. a Vimeo On-Demand channel is available 24/7. For viewers who prefer to stream, you can also download Total Faith Network TV digital channels on all ROKU devices, AmazonFireTV and AppleTV. It is a win-win for everyone, you the viewers, our media partners/advertisers, the creative content providers and of course Total Faith Network. TFNTV provides content which includes Religion/Family/Sexuality, Politics/Government/War, Arts/Entertainment/Media, Education/Law/Labor, Economics/Business/Healthcare. TFN represents freedom of mass communication and public expression through affordable, practical and effective mediums *Freedom of the press*

“People of diverse background, culture (especially the African Diaspora), ethnicity, religion, entrepreneurs, community organizers, practitioners, clinicians, politicians, activists, advocates, journalists, bloggers, producers, authors, and local & worldwide artists shall not be denied a platform of expression... on TFNTV… each have something to offer. Their personal stories and work may prove to be fertile ground for creativity and innovation that benefits others to heal in empowering ways! EVERY1 Wins at TFN" Dr. Cynthia Oriyomi Ashley, CEO/Pres. TFNTV & Chair of ROCMAN Foundation

A graduate of New York Theological Seminary, a progressive seminary Dr. Cyndi earned the following - Master of Divinity, Master of Arts in Religious Education and Doctor of Ministry. As a reform progressive educator, she knows precisely her mandate and that is to help transform the way people see themselves, and to strengthen, ignite and empower individual lives through strategic tools of mass communications, media pedagogy (literacy) and prophetic prayer teachings. She's known for her compassion, humility and transparent demeanor while engaging her audiences to interact with her for their own powerful breakthrough and transformation. A catalyst for transformation interweaving her personal stories of adversities, courage and faith, and her advanced education with professional insight are used as powerful tools for change. Her spiritual wisdom to motivate audiences to harness their own power within inspire them to live their life out loud, unapologetic and authentically despite life's trials, tribulations and disappointments. Whether her audience is men, women, youth or seniors she passionately offers her own unique blend of media empowerment, spiritual wisdom, recovery techniques and practical life strategies to move them forward and embrace each day as a new beginning.

When it comes to civic & global engagement, Dr. Cyndi is indeed a true leader. She was recently appointed an Ambassador of the Winnie Mandela Cup in South Africa a civic organization that use soccer to bring awareness and the economic impact of Gender Based Violence (GBV). She is Chairwoman & Trustee of the United States Adjustment & Recovery Act for New York State; she was appointed as the Communications Director of We Count, Inc.; she is the Executive Ambassador and Advisory Board Member for Global Vision Children's Fund Corporation (GVCF); she is the Director of Diaspora Affairs for Pan African Chambers of Commerce (PACC); she is the Communication Chair for the New York City Housing Authority National Association for the Advancement of Colored People (NAACP); she was elected and served as Countywide First Vice President of the Westchester Black Women's Political Caucus (WBWPC) for two-year term (2014-2016). Dr. Cyndi is the Executive Producer for two annual award events, Total Faith Network Awards Dinner Gala Benefit and the Tribute to People of the African Diaspora Awards. In the summer of 2018 Dr. Cyndi registered as a mayoral candidate with the New York State Board of Elections for the largest city in Westchester County, the fourth largest city in New York State - City of Yonkers and later amended her seat to campaign for County Legislator to run against the unopposed incumbent in her district.

Mercy said NO! God's grace said YES! Dr. Cyndi's story of pain and survival is very real for her! Since 1994 through Divine intervention, Dr. Cyndi continues to live free & serene from abuse and of the dis-ease of addiction. She learned to master the storms of life, one day at a time and proves how total surrender daily to a power greater than herself continues to lead her life! Dr. Cyndi not only uses prayer as a tool for teaching but her prayers are focused on purpose, power and her God given authority to be sovereign among the land of the living. Dr. Cyndi humbly and with a heart filled with gratitude, after two successful brains surgeries and daily adapting with a traumatic brain injury States, "I would not and could not make it in this current life without prayer meditation & surrender. I declare out loud I Am who I Am and I Be who I Be UnApologetically…I shall carry out my mandates and fulfill my destiny..."

As we know today throughout the USA there is what has been penned as the "opioid epidemic" -  many children of all ages, young adults and elders are caught in the grips of illicit drug use and pharmaceutical medications!  Dr Cyndi also battled for 20 years with the dis-ease of addiction and abuse from the age of 13 to 33 years old.  Today, When she's not hosting her television talk show, "The Dr. Cyndi Show," she is sharing her experience, strength and faith as points of references to lecture to her audiences of all ages informing them that recovery from addiction and abuse is absolutely possible at any age, AND dreams deferred can absolutely manifest when you're no longer bound by this world's ill systems of limitations designed and engineered to enslave the mind... Dr. Cyndi's published books are 1) What is True Power? The Love of God; 2) The War on Females in Mainstream Media, Especially Females of African Descent; and 3) The God of Progressive Education, Digital Technology and Social Media Empowerment.  Publications soon to be released are: 1) No Trace No Track the Chronicles of my life & How I Overcame the Dis-ease of Abuse and Addiction; 2) The First, Last & Only: My Journey Through Seminary; and 3) My Life Support: A Mother's Story Through Her Daughter's Eyes! 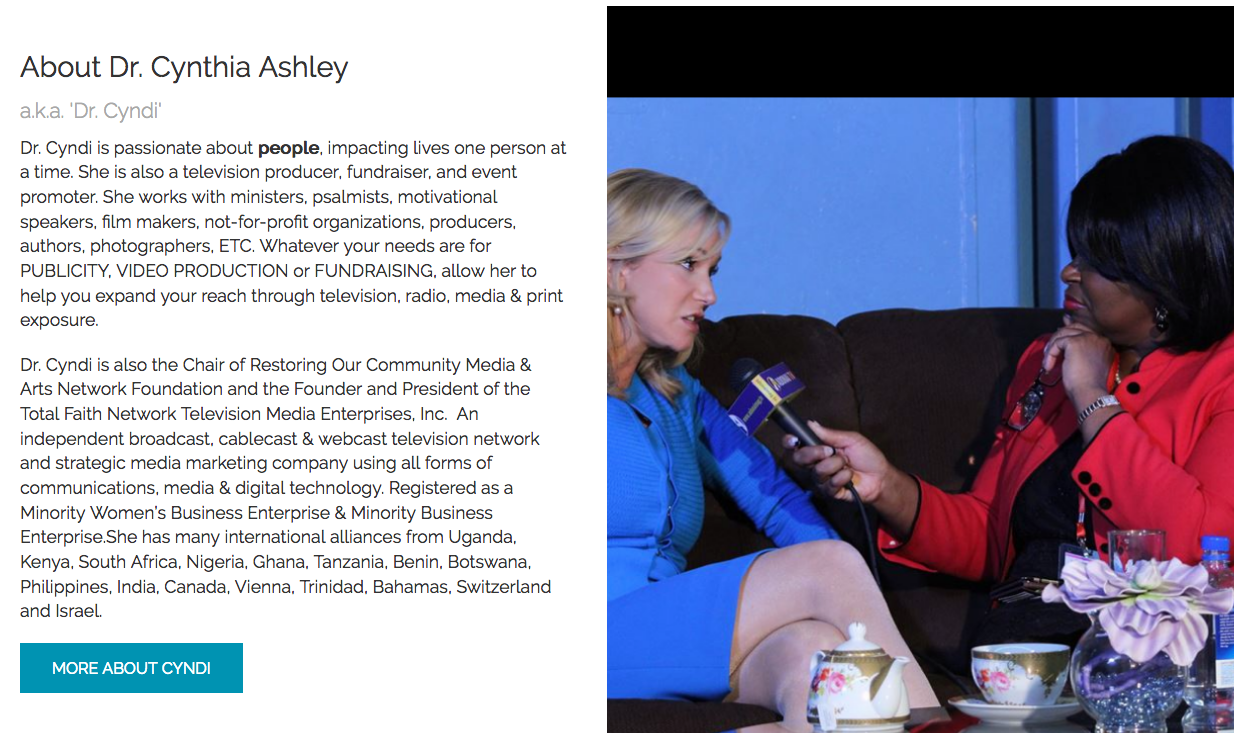